Home / Federal Reserve / Economic Inequality Is Not Increasing. Propaganda Is.

It never ends. We are besieged by articles on today’s increasing economic inequality. These articles have three things in common:

1. Each one has a favorite explanation/boogeyman.
2. Each one calls for political reforms to make things more equal.
3. Each one fails to mention Pareto’s 20/80 law.

Here is the main problem with these articles: economic inequality has not increased since at least 1897 — the year that Vilfredo Pareto published his discovery: about 20% of the people in every European nation he studied owned about 80% of the wealth.

Every year, when about 1,500 of the richest people in the world meet at Davos, Switzerland to attend the World Economic Forum, a Left-wing group called Oxfam issues a report. The group rewrites the annual report and the accompanying press release, but it is always conveys the same message: about 1% of the rich own 50% of the world’s wealth. I wrote a response to Oxfam and its report in 2014: “Envy Never Sleeps: Attacking the Rich.” I did this again in 2015: “Pareto Statistic: The Wealthiest 1% Will Soon Own 50% of the World’s Wealth.”

The Right also indulges in similar expressions of outrage. Here is an example.

This was offered by Charles Hugh Smith. I like it because it includes a pair of graphics. Both of them are tied to the underlying image of a pyramid: straight sides, with the same angle all the way up, from base to capstone. The image is pure Pareto. 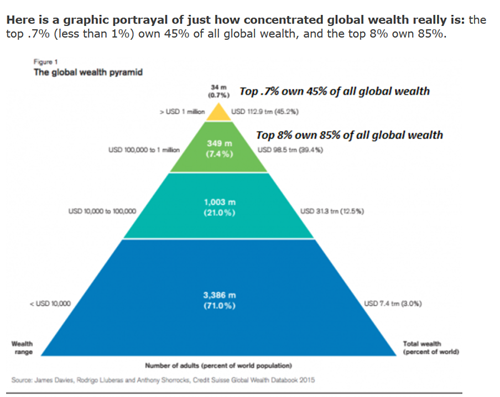 We are supposed to be aghast.

The Pareto law is a power law. The same 20/80 rule applies all the way up. This is why it is a pyramid.

Smith’s pyramid shows that 0.7% of the population owns 45% of the wealth.

This sounds about right. As we say, it’s close enough for government work.

Smith blames this pyramid on the Federal Reserve System.