Today is the 25th anniversary of the most important invention that any individual ever came up with: the World Wide Web. Not even Gutenberg matched it. Korea had moveable type two centuries before he invented it.

Tim Berners-Lee invented the Web, all by himself, on March 12, 1989. Then he implemented it over the next two years.

He did not patent the idea. He gave it away. He changed the world, mostly for the better.

He converted an invention of the United States government’s DARPA — the Defense Advanced Research Projects Agency — into a decentralized, international institution that represents the greatest threat to political centralization in man’s history.

The Web gives the National Security Agency and the Central Intelligence Agency enormous power to spy on the world. It also gave one man, Edward Snowden, the power to expose the spies as no one ever had before. Never before in the history of the spooks has there been this much bad publicity. One man did it.

Today, the lead story on Google News was this: Feinstein shifts tone in calling out CIA search. Senator Feinstein had been the Senate’s leading cheerleader in its use of the Web for snooping. Then she found out that she and her colleagues in Congress have been the targets. She is now on a rampage against the CIA. The story is all over the Web. 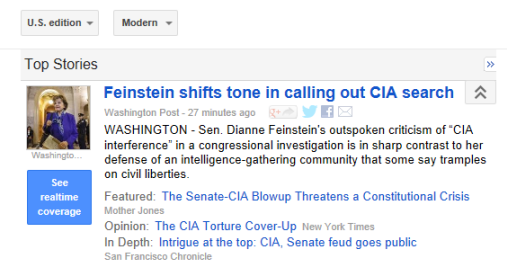 The head of the CIA insists that the CIA never spied on Congress. No one believes him, especially no one in Congress.

The Web has changed our world, and it will change it far more. That is because no one owns it as a whole. No one controls it. But its parts are privately owned. It is customer-centric. The users are in control.

In an article in Britain’s Left-wing Guardian, the author bewails these aspects of the Web. They are the reasons I cheer it. These are the reasons it has changed our lives for the better. They all boil down to this fact: The state does not control it.

His first observation is true, and he applauds it.

1 The importance of “permissionless innovation”

The thing that is most extraordinary about the internet is the way it enables permissionless innovation. This stems from two epoch-making design decisions made by its creators in the early 1970s: that there would be no central ownership or control; and that the network would not be optimised for any particular application: all it would do is take in data-packets from an application at one end, and do its best to deliver those packets to their destination.

It was entirely agnostic about the contents of those packets. If you had an idea for an application that could be realised using data-packets (and were smart enough to write the necessary software) then the network would do it for you with no questions asked. This had the effect of dramatically lowering the bar for innovation, and it resulted in an explosion of creativity.

What the designers of the internet created, in effect, was a global machine for springing surprises. The web was the first really big surprise and it came from an individual — Tim Berners-Lee — who, with a small group of helpers, wrote the necessary software and designed the protocols needed to implement the idea. And then he launched it on the world by putting it on the Cern internet server in 1991, without having to ask anybody’s permission.

In short, it is the product of one man’s creativity — not a committee.

This bothers him: free men are using a government-invented system to make profits. The horror!

The internet was created by government and runs on open source software. Nobody “owns” it. Yet on this “free” foundation, colossal enterprises and fortunes have been built — a fact that the neoliberal fanatics who run internet companies often seem to forget. Berners-Lee could have been as rich as Croesus if he had viewed the web as a commercial opportunity.

I am such a fanatic. Whenever individuals can appropriate a government-funded project, profiting from it by removing it from government control, I’m in favor of it.

A free man gave something away. He took a government-funded operation, which was designed to overcome the threat of a nuclear bomb on a centralized military communications system — and made it productive. In short, he made tax money productive. In doing so, he reduced government power. This horrifies our critic.

Mark Zuckerberg was able to build Facebook because the web was free and open. But he hasn’t returned the compliment: his creation is not a platform from which young innovators can freely spring the next set of surprises. The same holds for most of the others who have built fortunes from exploiting the facilities offered by the web. The only real exception is Wikipedia.

This has placed private ownership at the top of the benefits of the Web. Private ownership unleashed has enormous creativity. It has mobilized the spontaneous order, merely by making opportunities available to all comers.

In many areas of life, the law of averages applies — most things are statistically distributed in a pattern that looks like a bell. This pattern is called the “normal distribution”. Take human height. Most people are of average height and there are relatively small number of very tall and very short people. But very few — if any — online phenomena follow a normal distribution. Instead they follow what statisticians call a power law distribution, which is why a very small number of the billions of websites in the world attract the overwhelming bulk of the traffic while the long tail of other websites has very little.

Pareto’s 20-80 law governs the Web. Surprise, surprise! It dominates many things. It is an order that emerges out of an unplanned environment. Why should anyone complain? But this horrifies our critic. Why? Because of this:

8 The web is now dominated by corporations

Despite the fact that anybody can launch a website, the vast majority of the top 100 websites are run by corporations. The only real exception is Wikipedia.

Private enterprise has make the customer king of the Web, and therefore king of the Internet. This has passed control to individuals. The corporations must serve individuals. Individuals decide what they want the Web to do for them. The government does not.

This is the heart of liberty:

Take Google, the dominant search engine. If a Google search doesn’t find your site, then in effect you don’t exist. And this will get worse as more of the world’s business moves online. Every so often, Google tweaks its search algorithms in order to thwart those who are trying to “game” them in what’s called search engine optimisation. Every time Google rolls out the new tweaks, however, entrepreneurs and organisations find that their online business or service suffers or disappears altogether. And there’s no real comeback for them.

The public likes to use Google. Google makes money because it serves customers. Producers try to game the system; then Google takes away their advantage. This is exactly what I want as a consumer.

10 The web has become a memory prosthesis for the world

Have you noticed how you no longer try to remember some things because you know that if you need to retrieve them you can do so just by Googling?

Plato made the same argument against writing. I remember this, because I read it somewhere. I don’t know where. But I can find it on the Web. So can you. I won’t bother. If you do not believe me, you can follow Casey Stengel’s dictum. You can look it up.

Because of the profit-seeking nature of the decentralized Web, this is true:

12 The web has unleashed a wave of human creativity

Before the web, “ordinary” people could publish their ideas and creations only if they could persuade media gatekeepers (editors, publishers, broadcasters) to give them prominence. But the web has given people a global publishing platform for their writing (Blogger, WordPress, Typepad, Tumblr), photographs (Flickr, Picasa, Facebook), audio and video (YouTube, Vimeo); and people have leapt at the opportunity.

There are causes. There are effects. Our critic does not like the causes, but he likes the effect. That is, he is a Leftist. They have been the free market’s free riders for over two centuries. They have been blessed by liberty, and they have used this liberty to attack the economic institution that gave them liberty: the free market.

20 The web has an impact on the environment. We just don’t know how big it is

The web is largely powered by huge server farms located all over the world that need large quantities of electricity for computers and cooling. (Not to mention the carbon footprint and natural resource costs of the construction of these installations.) Nobody really knows what the overall environmental impact of the web is, but it’s definitely non-trivial. A couple of years ago, Google claimed that its carbon footprint was on a par with that of Laos or the United Nations. The company now claims that each of its users is responsible for about eight grams of carbon dioxide emissions every day. Facebook claims that, despite its users’ more intensive engagement with the service, it has a significantly lower carbon footprint than Google.

Keep those servers absorbing electricity! Keep those carbon footprints growing! As long as companies are keeping customers happy, the spontaneous order will continue to displace the governments’ central planners. The free market’s decentralized invisible hand will continue to place ever-tighter limits on the government’s centralized visible hand. If this takes a little extra carbon — or extra nuclear power — so be it. It is a small price to pay.

The Web is overcoming the Left. It is delivering information to customers and their servants, profit-seeking corporations. It is making it difficult for the government’s bureaucrats to hide. Even Diane Feinstein is slowly catching on.

The mainstream media are fading in importance. They are being pushed out into the “long tail.” Matt Drudge has more leverage than any television network — surely more than CNN and MSNBC combined. The public has spoken.

It will continue to speak.

Happy Birthday, Web. May you have many more!