Home / Media / The 2016 Political Cartoon That Gets It Right

Political cartoonists are among the most creative artists in the world. How do they do it, day after day? How does anyone come up with that many creative ideas?

There have been hundreds of thousands of them over the years. They stretch back two centuries.

The cartoons that Thomas Nast drew of New York City’s “Boss” Tweed in the early 1870’s still get into American history textbooks. They brought him down, as he feared they would. Tweed offered to pay Nast to stop drawing them: $500,000 — at least $20 million in today’s money.

We see political cartoons. We smile inwardly. Maybe we smile outwardly. Occasionally, we laugh. Then we forget them.

Political cartoons are like leaves in autumn. They float downward, pile up on the lawn, and either get bagged or they rot. They are as memorable as last year’s newspaper. They are immediate. Therefore, they don’t last.

There is one political cartoon that may have shaped American politics. Had it not been for the Web, I would not know who drew it: Dennis Renault. He was not a professional cartoonist. He was a student, on and off, at UCLA. He drew the cartoon late in the 1960 Presidential campaign. He submitted it to the UCLA Daily Bruin. The editor, Mort Saltzman, ran it. It soon went all over the country: viral, we would say today. This was in the era before photocopying was common. The first office Xerox machine hit the market in 1959. So, people used mimeograph machines to copy it. It got posted on walls, in phone booths — everywhere. It was a picture of Nixon. Under it was a question: “Would you buy a used car from this man?” 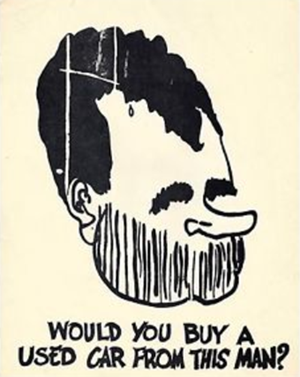 Because the 1960 election was so close, it is possible that this cartoon won the election for Kennedy. I remember it at the time . . . or think I do. The question soon became a catch phrase in the American language. There were lots of variations of the cartoon. You can find these online.

This week, I saw a cartoon that I think will stand the test of time. It gets across the essence of the 2016 Presidential campaign. See if you agree.