The liberal Democrat site Salon.com has done yeoman service by publishing three excellent articles on how and why the House of Representatives will not go Democratic in November.

The GOP rigged the House: Even a massive Donald Trump defeat wouldn’t give Democrats control.

This is how the GOP rigged Congress: The secret plan that handcuffed Obama’s presidency, but backfired in Donald Trump

Democrats are kidding themselves: The House is out of reach, period

The reason is Elbridge Gerry, one of two “Founding Fathers” who really did understand practical politics. (The other was Aaron Burr.) He devised the system known as Gerrymandering. He was a Jeffersonian who figured out how to stymie the Federalists by re-drawing the districts of the Massachusetts state senate. He showed the state legislature, then under control by the Jeffersonians, how to design long, meandering districts that would embrace large numbers of Federalists, leaving the rest of the state filled with tightly knit House districts with just enough Jeffersonians living within them to win. This also turned out to work great for the House of Representatives. Here is the Wikipedia entry:

The word gerrymander (originally written Gerry-mander) was used for the first time in the Boston Gazette on 26 March 1812. The word was created in reaction to a redrawing of Massachusetts state senate election districts under Governor Elbridge Gerry (1744–1814). In 1812, Governor Gerry signed a bill that redistricted Massachusetts to benefit his Democratic-Republican Party. When mapped, one of the contorted districts in the Boston area was said to resemble the shape of a salamander.

The original gerrymander, and original 1812 gerrymander cartoon, depict the Essex South state senatorial district for the legislature of The Commonwealth of Massachusetts. 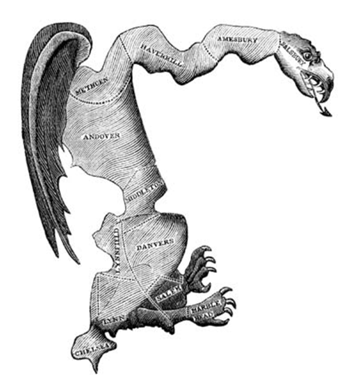 Gerrymander is a portmanteau of the governor’s last name and the word salamander. The redistricting was a notable success. Although in the 1812 election both the Massachusetts House and governorship were won by Federalists by a comfortable margin and cost Gerry his job, the redistricted state senate remained firmly in Democratic-Republican hands.

Gerrymandering is with us still. Both parties are good at it. The key is to have a runaway victory nationally in an election year that ends in a zero. These are years in which the federal census is taken. State legislatures that form in years ending in a one get to draw the electoral districts for the next decade.

I recall from my adolescence what is arguably the consummate example of a Gerrymandered district in American history: California’s 26th Congressional District. It was so Gerrymandered that the liberal Republican governor who signed the redistricting law in 1951, Earl Warren, asked for an explanation. The district began in west Los Angeles, where Jews lived and voted. It meandered narrowly across town and ended up in the geographical balloon known as Watts, where Blacks lived and voted. You can read about it here, page 83.

So were state legislatures. Then came the harvest: re-drawn Congressional districts. To say that they are locked up until 2021 is putting it mildly. This is what the three Salon articles discuss at length.