In early September, 1980, Ronald Reagan came to Dallas to deliver a speech to 15,000 Christians at Reunion Arena (since torn down). It was the final session of the National Affairs Briefing Conference.

All three presidential candidates were asked to speak: Reagan, Carter, and Anderson (lest we forget). Only Reagan accepted.

For three days before the speech, Christians had sat through training sessions on political activism. This included 2,000 pastors. A lot of the attendees did not believe in political activism at the beginning of the conference. Most of them did at the end.

I spoke at one of those sessions. It was the largest live audience I ever had.

The tape recordings of those presentations have disappeared. I cannot find anyone who has a set. I lost mine decades ago. Yet those lectures marked the arrival of the New Christian Right to American politics.

That conference was an early warning indicator of what was to take place in November: Reagan’s landslide victory. The mainstream media and pollsters in early September expected him to lose. The Christians blindsided the Establishment in November. They had not seen it coming.

Take a look at this chart of the polls. The original is here. Establishment political analysts have various explanations: the Iranians and the hostages, the second debate, etc. The chart does not support these explanations. Reagan’s large lead was sliding sharply until early September. Carter was gaining on him. The turnaround for Reagan came in early September. Carter never caught up. 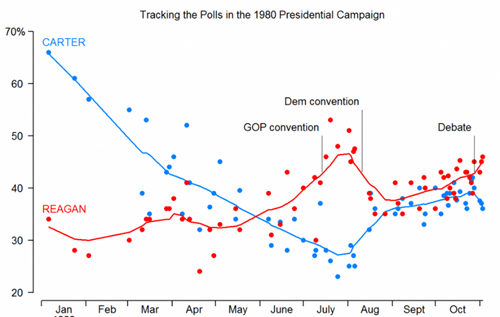 Yet there is almost no trace on the Web of the National Affairs Briefing Conference. It was a political turning point in America, yet historians of American politics and historians of American religion remain ignorant of it, just as they were in 1980. There is no Wikipedia entry. It was not media-worthy in 1980.

Prior to 1981, when his demeanor and ministry changed radically, Rev. James Robison was a spectacular preacher. His style now is low-key and soft-spoken, which befits a ministry based on helping the poor. Not in 1980. He gave the introductory speech/sermon. You will hear it here. Then Reagan spoke.