Home / Media / Lost in Translation: The Rolling Stones in Cuba

On Tuesday, March 22, President Obama was in Cuba, the first President to visit Cuba in 90 years.

On Friday, the Rolling Stones became the first famous Western rock & roll group ever to play in Havana. It was a free concert.

Mick Jagger scheduled the performance a few months ago. Did he coordinate this with the White House? Probably the other way around. No one refers to Mick Jagger as a lame duck . . . or lame anything else.

As Jagger said — in Spanish — times are changing.

The concert was bizarre. All of their concerts are bizarre. They are bizarre. But the word “bizarre” does not quite convey the true absurdity of the event.

First, among the VIPs was Warren Buffett. That man never misses an opportunity — a trait he shares with Jagger. The biggest real estate boom on earth is about to begin in Cuba. How much Havana beachfront property is he buying? How many factories to be torn down and replaced? Or did he come just to see a bunch of kids on stage?

Second, the kids — in their mid-seventies — still did their stuff. But what kind of stuff did they do?

They sang “Brown Sugar,” just like I knew they would.

Third, these young women had waited hours to see them sing this song, as they have sung it for 45 years — with enthusiasm. 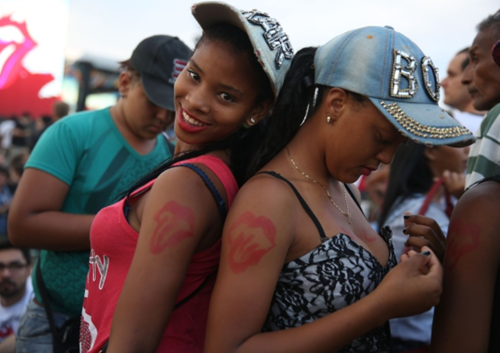 What did they hear?

Ah, but what didn’t they hear? What millions of fans have never heard in 45 years: the lyrics, co-authored by Jagger and Keith Richards. For 45 years, the lyrics have been hidden in plain byte. Doubt me? Click here:

Is that what you heard?